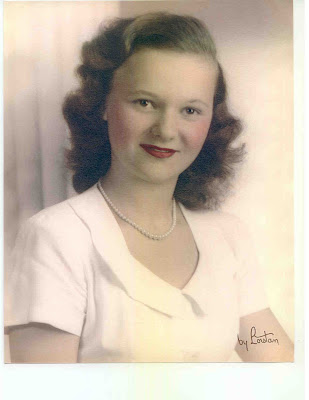 Above is a picture of my mother as a young woman. I want to tell you about it.

My mother was born on July 18, 1927, the second child of Nicholas and Catherine Sochak.

Nicholas and Catherine were refugees from Ukraine. They came to the United States as teenagers, arriving separately, not with a fourth-grade education. Catherine was from an agricultural area in western Ukraine when she left because her family wanted to marry an older man instead of her young son, who had been recruited into the army. Her first job here was as a bride. Nicholas was from Kiev, where he was trained as a coach. In the United States, he worked as a potter in oil and toiletries. When Nicholas and Catherine came to the United States, they thought they might eventually return to Ukraine. But World War I and the Russian Revolution intervened, changing plans. Catherine's boyfriend died in battle. Nicholas and Catherine met, got married and settled in a small row in Trenton, New Jersey, where they spent the rest of their lives.

Catherine and Nicholas had two children, my uncle Walter and my mother Dorothy. When my mother was born, her parents chose the name "Dorothy Theresa Savak". But because Catherine spoke with heavy accents, the clicker providing the birth certificate did not understand her. So officially, my mother's middle name was "Tessie" and not "Teresa". She never bothered to change that.

Nicholas and Catherine were tough and smart. They saved enough to send Walter to college and medical school. He served as a physician in the military during the Korean War. I once asked him if he works in a MASH unit, like in a TV show. He said no, he worked close to the face. He placed the wounded soldiers in the best position and then sent them to the MASH unit to be brought in for treatment and healing. After the war, he became a pathologist at the Trenton Area Hospital. He got married and had two eldest daughters, my cousin.

My mother attended Trenton High School (the same high school I attended years later, attended by economist Robert Solo around the same time). He danced the bucket. He skied the Delaware River. He loved to read and go to the movies.

Due in part to limited resources and partly to the gender bias of the time, my mother was not allowed to go to college. Years later, her parents would say it was their biggest regret not to give her a chance. Instead, my mother studied hairdressing. She was also pressured to marry the son of some family friends.

The marriage did not work. With my pregnancy, her new husband began to “walk around”, rejoicing for my mother’s infidelity. They divorced, and took him out of their lives. But the marriage left him with one blessing – my sister Peg.

My mother continued to live as a single mother. A few years later, he met my father, also named Nicholas, through social work by local Ukrainian churches. They both love to dance. He wanted to marry her, but once burned, he was reluctant at first. Only when she realized that he had become her best friend did she finally accept him.

In 1958, nine months after I was born, my parents, Peg, and I left Trenton for a newly built split house in Cranford, New Jersey. My father worked for Western Power, with AT&T weapons, first as a draftsman and then as an electrical engineer. He worked there until his retirement. One of his specialties was the battery design. When I grew up, I thought it looked very tiring. Now I understand how important this is.

My mother then turned to working as a hairdresser to become a full-time mother. But she kept all the hair accessories from her store – chairs, photos, scissors, razors and so on in our pool. She would cut her friends hair by the time I was a little boy, she would cut my hair too.

I attended Brookside School, a public school a short distance from our home. When I was in second or third grade, my mother called to see the teacher. The class was given some standardized testing. “Greg got better,” the teacher said. "We were very surprised."

At that moment, my mother decided that school was not working for me. I was a speaker and researcher at home but shy and ignorant at school. I need a change

She started looking for the best school I could find. She decided it was Pingari School, Independence Day School, about ten miles from our house. She asked me, and I agreed.

The question then arises, how to pay for it? Penguin was expensive, and we didn't have much extra money. My mother decided she needed to go back to work.

She started looking for a job, and presented herself with an extraordinary opportunity. Union County, where we lived, had opened a public vocational school, and they were looking for teachers. She was a cosmetology teacher and was employed.

There was an obstacle, however. Teachers, although lessons such as the hairdressing business, require teacher certification. It required some special college courses, and my mother took none. So he got back out of necessity. While teaching at the vocational school during the day, she began college courses by night to obtain a certificate, while giving birth to two children.

My mother taught in a vocational school until retirement. During this time, she also wrote several books, Beauty Culture I and II, which were teacher's guides. From the summary of the first volume: "The curriculum is divided into six sections and includes the following guidelines: shop, school, and cosmetologist; sterilization procedures in beauty salons; scalp applications and shampooing; hair style grenades. And hair loss and iron removal. ”I think one might look at this project as a textbook writer for my career.

When my parents both retired, they were still good friends. They traveled together, exploring the world in ways that were impossible when they were young and poor. During my third year as a professor of economics, I visited LSE for about a month. I encouraged my parents to come to London for a week or so. They had a good time. I believe this was the first time they had ever been to Europe. When I was older, vacations were usually on the edge of Jersey.

My father died a few years later. My mother lived alone for the next three decades. He then lived full-time on the shores of Jersey in Brandt Beach, Long Beach Island. The house was close to the sea and was large enough to encourage her growing family to come for a long visit. Two children, five grandchildren and four great-grandchildren, Murray. He was never happy to be surrounded by his family.

My mother loved to cook, especially the Ukrainian food she learned as a child. Holbatsy (stuffed kebab) was a specialty. The other was capsta (kebab) soup. At one point, a local newspaper offered to publish her Capsta soup recipe. They did it, but by mistake. Each crop that had to be measured in teapots was printed like tables. The paper then corrected but probably to no avail. I'm not sure if I've ever tried incorrectly printed combinations and, if so, to what extent.

During her free time over the years, my mom read extensively, played free cell games on her computer, and watched TV. A few years ago, when she was around 90, I visited her, and I pointed to the show "Breaking Bray." She hadn't heard of it. She suggested we watch the first part. And then another. And another. After I left, he sat down on all five seasons.

As he got older, living alone became harder. When she had trouble getting old up and down, an elevator was added to her house. But slowly her balance deteriorated, and she fell several times. She had small blows, and then a very significant one. She went to the nursing home. Every time I visit, I bring her new books to read. The love for reading her never waned.

That is, I fear, where the story ends. Last week, Dorothy Teresa Savchak Mankio tested positive for the Cove-19. Yesterday, she died. I will lose him